First HTB writeup (and some notes on writeups themselves): Traceback

Hello again everyone! As mentioned in the previous blog post I will be using this blog as a place to post some writeups on stuff I do. As such, I'll be starting with Traceback, an Easy Linux box on HackTheBox. I'm starting with this box since it has been recently retired.

There are also some older machines (already retired) that I have to publish writeups for. However, since this one was fresh on my memory and I still had access to it, I decided to start by writing on it. The access proved useful, as I did not have some screenshots that were nice to showcase here. I'll need to remind myself to take more of those 😁

Note for those in a hurry: Summarized version near the bottom :)

Initial notes on my writeups

Some things I need to mention first: the writeups I'll be posting will most likely be less straightforward than the typical writeups that can be found online. My focus will be more on highlighting my though process than specifically just showing the correct path. I'm writing these posts like so in order to have a (external?) look at my own thought process while sharing it with others. Additionally, there already are lots of great posts that contain a simple path to the solution, and as such this will also be my way to bring some diversity to the table!

Some other initial notes: For any that may be wondering, I use Zim Wiki to take notes while doing boxes. I enjoy having an editor that makes hierarchical notes easy (as I like this type of organization), has functionalities to link between pages and I also preferred a local app instead of something browser-based. This was the best alternative I found so far, since CherryTree (the typical suggestion in infosec) is outdated and felt clunky when I tried it, and several others did not feel as simple to use as it did. If someone has a better alternative I would also appreciate some suggestions, since despite me being happy with this program right now I also feel like there are some things that could be better.

So, without further ado (since we already had enough of that), getting to the machine itself. As mentioned, Traceback is an easy Linux machine. Let's look at the results of our nmap scan:

As shown in the snippet above, I usually scan my targets with nmap -v -sV -sC -oA nmap/init <ip>. Since this is the first writeup I'm doing, I'll break it down:

Both SSH and an Apache webserver are exposed on this machine. I started by ignoring SSH since (in my experience so far) it's not common for it to be useful for the initial foothold, since it requires us to already have some credentials. As such, while a more extensive nmap scan was running (scanning all ports instead of only default ones, etc.) - which did not provide additional information, sadly - I started poking around with the exposed webpage.

After opening up the host in a browser, we are shown the following page (the background even blinks black and white for extra cool points): 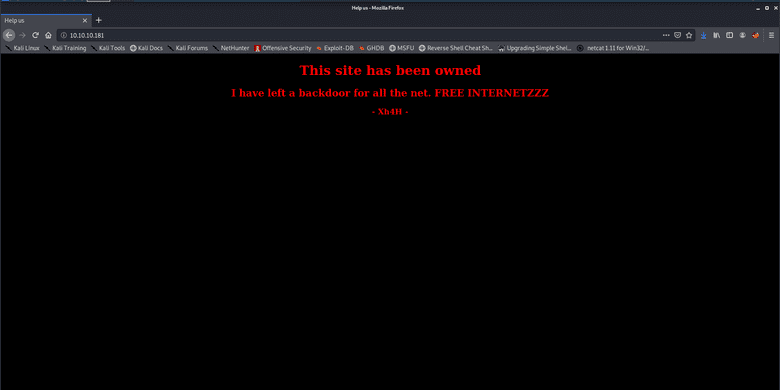 So, it seems someone has done all the work for us! Cool, then this shouldn't be too hard 😎

In the meantime, my gobuster scan was done, and it did not find anything at all. I was stuck here for a good while, until I decided to use my brain and start googling what I had on my screen. Since it was the only information that was available, then it must be useful!

Bingo! Searching for "Xh4H" + "Web shells" resulted in finding this repo. This seems to be a collection of webshells, so our hacker must have used one of them! We could try them manually, but what's the fun in that? By using ls -1 on the cloned repository we can create a wordlist to use with gobuster, which finds smevk.php as the used webshell!

Since this is the first time I'm mentioning gobuster in this blog, I'll also go over some options which have recently become my default:

This was a combination of watching ippsec's videos and looking at nmapAutomator's options along with some personal tinkering as well. 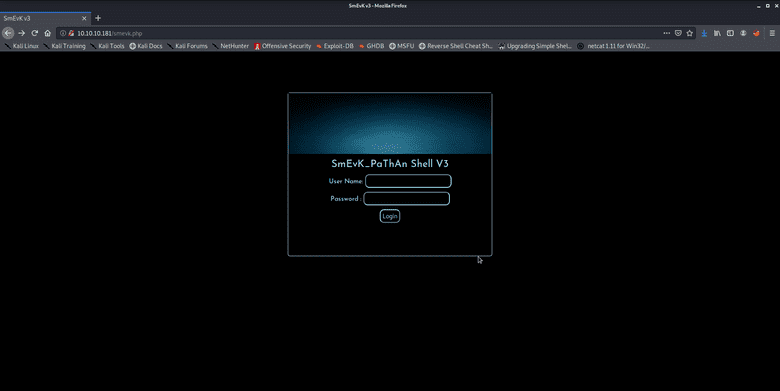 Hmm, this requires a login... Let's look at the source code. Default credentials would be admin:admin. Trying that works, nice!

Now we can use this webshell for RCE, uploading files, lots of things. Clicking the network tab on the navigation pane gets us a page where we can request a reverse shell by several methods. Selecting "perl" and inputting our ip and a port, and listening for a connection via netcat gets us our first reverse shell! 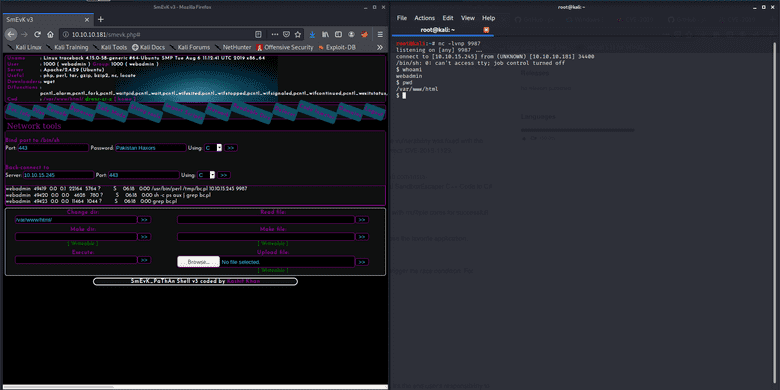 Quick notes on using netcat to listen for a reverse shell:

We now have a low privilege reverse shell! Foothold done! On to user...

First, I am used to doing something that is very useful to do whenever we have a simple reverse shell, upgrading to a full tty. The website linked has a lot of information on this, so I'll just mention that my preferred method is via python and the stty raw -echo trick. With this we get tab-completion, history browsing with arrow keys and everything else a tty provides, all over a netcat connection! It's a very cool technique to learn and is very useful since besides the tty being more friendly to interact with, we would otherwise be unable to run commands that require a tty, like su or sudo.

Something typical to try is sudo -l. Upon doing so, we find a potential privesc path:

Upon executing sudo as this user, we enter a REPL by the name of "Luvit". Google helps us discover that this is a Lua REPL. Searching Lua in GTFOBins shows us a way to break out of the REPL by spawning a shell, via os.execute("/bin/bash"). Trying that gets us a prompt indeed, privesc complete!

We can now access sysadmin's home, and there we find the user flag! (Note: Further exploration showed that the command could even be shortened to sudo -u sysadmin /home/sysadmin/luvit -e "os.execute('/bin/bash')")

User done! Now we'll start looking for paths to privesc to root. Here I'll admit I struggled a bit more. The majority of the two days I spent doing this box were most likely spent on this part.

I ran both LinPEAS and LinEnum and did not find anything that seemed too interesting. However, after running LinPEAS again, I noticed a weird process that I inspected again with ps aux:

However, I thought that it might be some periodic backup utility and forgot about it for a while (I promised you realism, so there we go, missing obvious leads 🙃).

I started to look at writeable files that were owned by root and even found myself looking at /bin/sh thinking that was the way to go and that I was so clever with my carefully crafted find command (searching for root-owned files that are editable by the current user)!

I thought I could use this and change the symlink and somehow do things! But besides that making no sense, some googling made me give up on that idea...

Finally, I went back to look at the process. Detected by ps aux. I even tried pspy as a way to look into processes some more, since I found it suggested somewhere. Basically, from what I understood, the process is spawned every now and then and sleeps for 30 seconds then copies the contents of /var/backups/.update-motd.d/ to /etc/update-motd.d/.

Let's look at the permissions in both directories, then!

We can't write to any of the backup files, which might have been what made me give up on the idea at first. However, if one is careful, we can see that the files in /etc/ are group writeable, and owned by the sysadmin group! Well, we just escalated our privileges to a user in that group, so we should be able to write this!

Looking into what these files do (did not do it at the time, so this is new to me as well) leads us to ubuntu wiki's article on the package. The TL;DR is: every 10 minutes (by default) the scripts are ran and their results are concatenated, along with a footer, to make up the motd.

At the time, I just spammed a command to replace the contents of some of the motd scripts with cat /root/root.txt which gets us the flag in the motd when logging in via SSH. Now, after some trial and error I managed to make a working approach to get a root shell:

However, I had some problems with this approach. I will detail them and the solution for each of them as follows:

After letting the while loop run for a while we receive a ping, which means that we can now ssh into the machine as root! Box done!

Since some people are always in a rush, here's the abridged version.

This was the second machine I did after coming back and my fifth root total (only easy Linux boxes at the time). The box was overall pretty easy (it's marked as easy so that checks out) and had interesting challenges.

Foothold was funny but not really all that challenging. My favourite part was most likely the privesc to root, and especially the part that I did specifically for this writeup: going back and getting a root shell instead of just reading the flag. I did not even use the loop when I first went through the machine, I was doing it manually! Yikes!

More writeups will follow in the near future. I most likely will be covering the retired boxes I did before coming back, since I can't post public writeups of active boxes (as per HTB rules). I'm not sure if I'll join them all in one post or split them, since I don't think my notes are too extensive (they weren't as good at the time). However, given how long this post ended up getting, I might need to split them regardless.

Additionally, I'll be posting a writeup about a CTF I participated in recently as soon as I get my notes together and some time and headspace to do so.

In the meantime I also started doing some Medium Linux HTB boxes (which were reeeeeaaally fun, highly recommend checking them out if you haven't done so already). I also started an Easy Windows box, but after getting user I'm a bit lost since I don't really know my way around the command line (and Powershell!). I'll keep on trying and hopefully there will be some writeups on that soon too.

Once again, thanks for putting up with my rambly nonsense :)
And as always: thanks for reading!