Take a look at my Experience, Education and Projects  or check out my Blog! 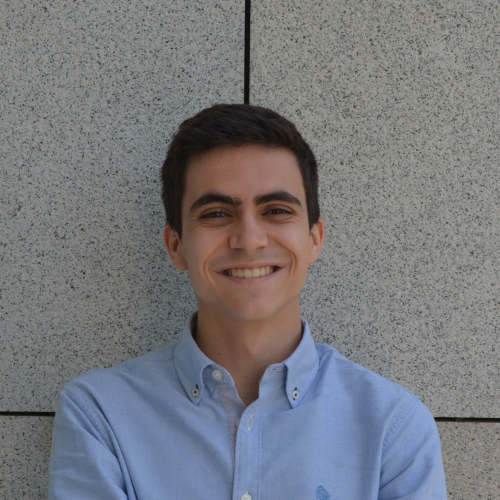 Took part in the development of an OAuth platform for personal identification (Log in with Fractal ID) with KYC/AML regulation. The main difficulty was to quickly adapt to a big codebase in a new technology stack while also having to understand the complex OAuth protocol, along with following strict security standards.

My two biggest breakthroughs were succesfully migrating the GitHub organization’s configurations to Terraform (enabling them to be peer- reviewed and version controlled) and setting up a mailer service in a micro-service that enabled sending e-mail confirmations for live verification bookings.

Developed a Full-Stack application for sharing user-submitted tips and tricks for Git. The main difficulty was never having worked in Web Development before.

Informatics Division of the Student's Union of FEUP, responsible for several projects and events throughout the school year. Member since 05/2017.

Organizing the Logistics Department of this 4-day event comprised of talks and workshops (and other surprises) by the students, for the students (organized by students of the Master's Degree in Informatics Engineering of FEUP (MIEIC) that belong to NIAEFEUP).

Year representative in board with teachers and students of other years. Representing my current year and aiming to improve the Course's Curricular Units via feedback and suggestions.

Additionally started participating in FEUP's pedagogical council (representing MIEIC's students) since 11/2019 approximatedly, in which College-level decisions are taken in regards to continuously improving the quality of education in this institution.

Student-organized Informatics' conference that occurrs every year and is organized in the context of a course unit at FEUP. I helped handle the event's logistics.

The National Meeting of Informatics Students is a portuguese conference that aims to bring together students of informatics to learn, socialize and connect with each other and the business world. The 2018 edition of the event took place in FEUP, in Porto and gathered around 700 participants, along with lecturers from diverse areas and sponsors from several companies, ranging from big to small.

Custom-built Continuous Deployment tool for the branch’s projects. Features Slack integration via its API and auto-deployment via Git.

The biggest challenge was being able to provide a consistent environment for deployment, which was solved by robust Bash scripts and careful Docker configuration.

I created this since I notised how troublesome and undocumented the manual configuration of the branch's server was. This was an effort to not only automate what can be automated but also document what can't in order for the "next ones in line" be able to take advantage of this ease of use, since now the configurations are simplified and version controlled :)

Open-source Front-End for public transport schedules. The existing app and website are not very good, thus the creation of this responsive PWApp.

The major challenges were creating a design on my own and working with an undocumented API. These problems were overcome by being persistent and through trial and error.

Sadly the project is currently not working since the APIs used were locked down by the transportation network companies. I hope to either contact them about this situation (unlikely to work out, sadly) or reverse-engineer the "protection" and probably get over it via some reverse proxies or similar :)

GET - Get Entertaining Topics - [email protected]

Social network for sharing user-submitted stories. Technical restriction of not using frameworks or libraries of any kind as a way to be introduced to the basics of web development without abstractions that might hide concepts. Developed in a team of 3 people. Had the highest scoring project grade.

Developed the visual interface for the board game "Mad Bishops" using WebCGF (a WebGL library) and JavaScript. Integrated it with the game logic developed in SICStus Prolog during the semester in [email protected]

Low level game in the context of the Computer Labs (LCOM) course unit that implemented several device drivers (timer, keyboard, mouse, graphics, RTC and Serial Port), later on chosen for a showcase to High School students about the course (in Semana Profissão Engenheiro).

These were implemented mostly over 1-2 day sprints during the school year, thus their unfinished state and potential bugs. However, since this was one of my first personal projects that actually became anything useful, I found it interesting enough to share :)